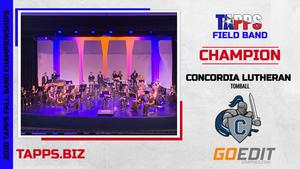 After a spring of canceled competitions, the Concordia Lutheran High School Band was so thankful to God to have the opportunity to perform music and create art together again. On Monday, October 27th, the band traveled to Waco to compete in the TAPPS Fall Band State Championships in two of the three categories offered, Drumline and Field Band.

Competing for the first time ever in the Field Band category, the band was required to perform a six to ten minute show with no marching or movement, judged solely on their musical performance. Concordia’s show “Quarantine Dreams” used classic rock pieces for students to dream of ways to break out of their quarantine. It featured Steve Miller Band’s “Fly like an Eagle,” Styx power ballad “Come Sail Away” with senior Matt C. as a mellophone soloist, and closed with the Beach Boy’s “Fun, Fun, Fun” as the dream comes to a close with “daddy taking the T-Bird away.” In addition to the band earning a “1” Superior rating, Concordia was also named the Field Band State Champion!

Drumline performed “Liberty and Independence,” a medley of American and British fife and drum tunes from the revolutionary war. This piece was written by our drumline instructor, Mr. Brian Callahan, alternating between the traditional American and British drum styles. The medley includes Liberty March, March Brittania, Chester, British Grenadiers, Yankee Doodle, and The World Turned Upsidedown. Concordia received a well-earned “2” Excellent rating in the Drumline category.

Due to the inclement weather, TAPPS was unable to have an awards ceremony at the end of the contest on Monday. Instead, director Mr. Jonathan Held surprised the band with the news of their state championship at the start of class the following day. Congratulations to Mr. Held, and to the assistant director, Mr. Kirchenberg, for their hard work preparing the students on this music and performance!

More important than the results, the band felt truly blessed just to make music together in a performance setting again, providing some normalcy in the time of COVID-19. Congratulations to the Concordia Band on their outstanding performances and state championship!