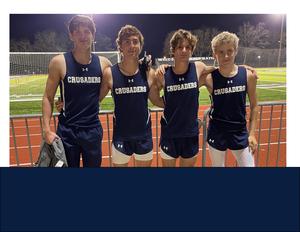 Both of Concordia's Track & Field teams have had some early successes in this 2021 season. Making up for a lost season in 2020, the team has had a few track meets already and both teams feature talented and young teams. The ultimate goal for the season is to get back to the TAPPS 6A State Championships and leave with either the State Title or at least a Top 3 team finish.

On March 4th, Concordia hosted 11 different schools for their annual Crusader Invitational. The Girls team showed depth and consistency in their 1st place overall finish while the boys team just missed out on 3rd place by 2.5 points finishing in 4th. Full Meet Results