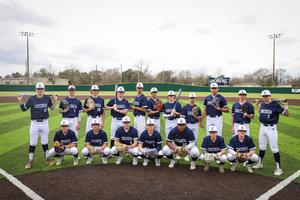 The Concordia Varsity Boys Baseball team has started the season winning many non-district games and look to carry success into district after break.

Concordia’s Varsity Baseball season has started well as the team began the season with four quick wins in the Fort Bend Christian Tournament. The next weekend, the Crusaders faced off against some tough public school competition in the Conroe Tournament. This year’s team is quite young as they only have four seniors (Jaxon D., Chase E., Andrew H., and Trace S.) but have quite the compliment of young, talented players and they have aspirations of making their 7th consecutive TAPPS 6A Final Four.

The Crusaders have reached at least the Final Four, every year since 2014. Due to the Coronavirus pandemic, 2020's season did not have a State Tournament so the team's streak is still intact. Even though the team is younger than it has been in previous seasons, the talent is still quite deep.

This year’s team features brothers Jax (3B/RHP) and Nolan (C) T., a junior and freshman respectively, who both are TCU Baseball commits. LHP/1B Sean F. (Jr.) has signed with Arkansas and several other young prospects include Michael H. (OF/RHP) and Alex P. (RHP/1B). The future is bright as 14 of the 18 players on Varsity are Juniors, Sophomores, or Freshmen.

The week before Spring Break, the team won a few non-district games with other local private schools. On Thursday, March 11th hosting Houston Christian, Concordia won 9-1 and had 11 total team hits including Michael H.’s (So.) 2nd home run of the season. Sean F. (Jr.) was the winning pitcher with three innings and six K’s. Trace S. (Sr.) closed out the game’s final four innings and threw 10 K’s and squandered any hopes Houston Christian had in mounting a comeback. With the win, the Crusaders moved to 7-4 on the season.

Then, on Saturday, March 13th, Concordia hosted Woodlands Christian and won 6-5. Michael H. was the winning pitcher and had two hits including the walk off home run (his 3rd of the season). Sean F. and Alex P. (So.) also chipped in with two hits helping the Crusaders move to 8-4 on the season.

Concordia will open district play away at St. Pius X on Tuesday, March 25th at 7pm. Their first home district game will be on Thursday, March 25th also at 7pm and the team and program will honor former Head Coach Rick Lynch who suddenly passed away in December. All former players, coaches, family, and friends are invited to attend the game. Snacks/refreshments will be served as we cheer on the Crusaders to victory!

Good luck Saders and keep up the great work!