Both Tennis Teams Finish Amazing Regular Seasons... and They Are Not Done Yet! 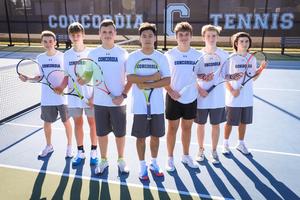 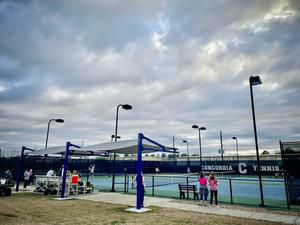 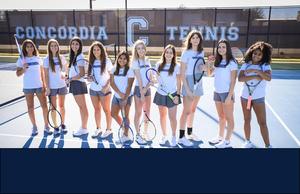 Concordia Boys and Girls Tennis Teams have finished the regular season and are looking forward to the District Tournament where they hope to secure several spots for the State Tournament in April.

The Concordia Tennis teams are having their best regular seasons in recent school history this Spring. Over the years, Concordia has featured several standout players and double teams, but what makes the 2021 squad special is their overall depth, thus allowing them to dominate dual matches.

The 2021 season has presented unique challenges due to the pandemic as fewer players were able to travel to away matches. Historically, Concordia would bring their entire roster and get the non-starting lineup players some matches, but this year, many teams only brought 6 players (2 singles players and 4 doubles players). There were other changes to make this season happen which include social distancing during practices and all coaches, spectators, and athletes wore masks when not actively playing.

Concordia was blessed with the K.S. “Bud” Adams and Family Tennis Complex in 2015 and they are proud to call the complex their home courts. The six courts, separated into three batteries of two courts each, has allowed players the ability to spread out and for Concordia to host many home matches. Several schools do not have their own courts on their campus forcing them to rent indoor spaces around Houston for their home matches. During the pandemic, schools have had a difficult time scheduling indoor matches and Concordia’s complex has hosted several district and non-district matches and is one of the top complexes among TAPPS schools. Specifically, Concordia hosted all of their non-district matches this Spring.

Both Boys and Girls teams have seen tremendous improvement from last year to the fall, and again from the fall to the spring. Players have been working on the court and in the weight room since August and are reveling in the results this spring. In fall of 2020, Concordia competed in the inaugural TAPPS Fall Team Tennis Tournament and placed 4th Overall. Now, the program feels ready for the Spring State Tournament.

The Boys team boasts an undefeated regular season record of 10-0-2 while the Girls have only been bested twice with a 10-2-0 record. (In dual matches, teams play a total of 2 single lines and 2 double lines, for a total of 4 matches that count toward the overall score, which creates the possibility of ties.)

The regular season dual matches are primarily for seeding purposes for the district tournament at the end of March. The top four singles players and top four doubles teams from the District Tournament will advance to the TAPPS 6A State Tournament.

2020’s season was not finished due to the Coronavirus pandemic and did not have a State Tournament. In 2019, as a Freshman, Aaron L. (Jr.) was the only Crusader to advance out of the District Tournament to State and made it to the quarterfinals in the singles bracket. This year many Crusaders are hoping to also go to State!

Standout players for the Boys team include #1 Singles player, Aaron L. who is 12-1 on the season, and looking to qualify for the State Tournament for the second time in his career. Gavin B. (So.) has primarily worked the #2 Singles flight is 13-7 on the season and improves with every match. Other players include Luc C. (Sr.), Gavin M. (Sr.), Chase C. (So.), Anders K. (So.), and Max D. (Fr.) who in some combination will help round out the Crusaders’ entries in the District Tournament.

Head Coach, Mike Schatz, commented on this season: “Our players have really bought in to the direction our program has moved and the work we have asked of them. We are lucky to have a very deep team on the Girls’ side as we essentially have two Varsity squads. We do not have as many boys this year, but we have seen tremendous improvement in our Boys’ team from last year to this year. We have great team chemistry, and everyone comes out to practice, ready to work!”

Over the last three decades, Concordia Tennis has had at least one individual State Champion (all three champions were Girls Doubles teams in 1998, 2005, and 2014) but has not ever gotten the team title. The best team finish was the 2005 Girls Team as State Runner-Up.