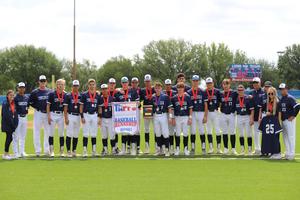 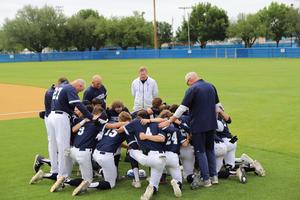 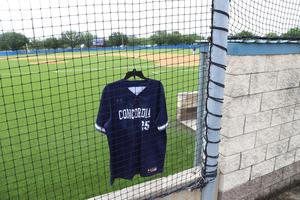 The Crusader Baseball team ended the season as State Runner-Up for the TAPPS 6A State Baseball Tournament
In a season dedicated to former Head Coach, Rick Lynch, the Concordia Baseball team battled and never gave up. The team lost their beloved coach in December 2020, just weeks before the 2021 season began. Throughout the season, the team wore caps with the #25 on the bill, wore patches on their jerseys, brought Coach Lynch's jersey with them to every game, and even had Coach Lynch's wife, son, or brother present at many games over the season. The team battled adversity and fell one run short, as they lost in the State title game 1-0 to Midland Christian.
The 2021 campaign was still a success on many levels, including that the team only graduates 4 seniors, and returns several young, core players to the Varsity level in addition to having a strong JV program with rising players. Overall, the team finished 21-12 (8-4 District) as State and District Runners-Up.
There are many stats that could be shared but here are a few that stood out:
- The team's strength was the bullpen, where the Crusaders had a team ERA (earned run average) of only 1.8.
- LHP and Arkansas Commit, Sean Fitzpatrick (Jr.) led the team in ERA (0.754) and K's (85), and tied for the team lead in Wins (5) in only 55 2/3 innings of work. Fitzpatrick also pitched a complete game no-hitter against St. Thomas on April 20th and had 13 K's in that game alone.
- RHP/3B and TCU Commit, Jax Traeger (Jr.) led the pitching staff with a 5-2 record.
- SS/RHP and Angelina College Commit, Trace Sanchez (Sr.) finished 4-1 when not playing shortstop.
- RHP/3B/1B Alex Petrovic (So.) finished the season 3-1 on the mound and was used all over the infield.
- Offensively, 2B and Blinn College Commit, Jaxon Daigre (Sr.) led the team in batting average, hitting 0.376 on the season (0.432 in district games!)
- RF Michael Herndon (So.) led the team with 3 Home Runs and C Nolan Traeger (Fr.) led the team with 18 RBIs.
The future is bring at Concordia Lutheran for Baseball as the team has made 7-consecutive State Final Fours (2014-2021). The team will not forget Coach Lynch, but they feel proud of the season they accomplished and know that he is looking down with pride on their season of work.