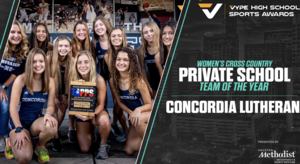 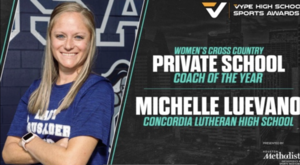 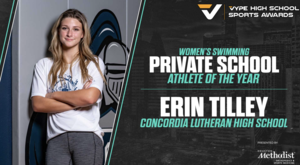 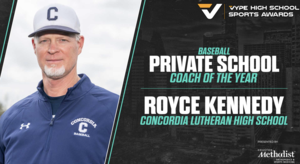 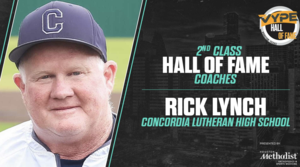 VYPE Houston hosted their annual 2020-2021 Awards at the end of June honoring athletes, teams, and coaches from public and private schools around Houston. To watch the full Awards show visit: https://youtu.be/DSad3f-X1Vc

For the athlete of the year awards, three candidates for each sport (excluding tennis) were named as the finalists. The Crusaders did very well as they received a total of x6 finalists for Athletes of the Year (T-2nd most of the Houston area private schools). Erin Tilley was Concordia’s sole Athlete of the Year winner for Women’s Private School Swimming. (Finalists for team and coach of the year awards were not published, only the winners of those awards were named.)

In addition to the coach, team, and athlete(s) of the year awards, VYPE Houston also inducted their second Hall of Fame class for both athletes and coaches. Concordia’s long-time Head Baseball Coach, Rick Lynch, was honored as one of this year’s inductees for VYPE’s Coaches Hall of Fame. Lynch passed away in December 2020 and had been a baseball coach in Houston for over 30 years, with the last nine years at Concordia.

Athlete of the Year Finalists by School