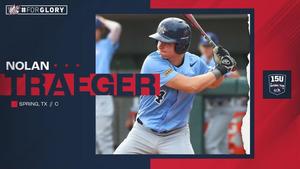 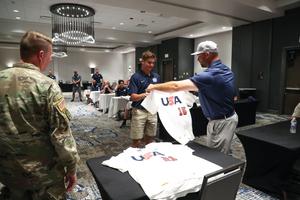 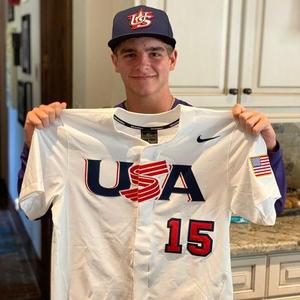 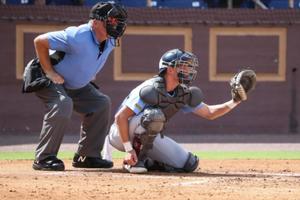 For the 3rd time in seven years, a member of Concordia’s Varsity Baseball program will be wearing USA on a jersey. Nolan Traeger (So.), age 15, joins legendary Crusader Baseball alumni Ke’Bryan Hayes ’15 (3B for Pittsburgh Pirates) and Shane Baz ’17 (RHP for Tampa Bay Rays) in this elite club. Hayes played for Team USA on their 18U National Team in the summer of 2014 while Baz recently represented USA in the Tokyo 2020 Olympics earning a silver medal this past summer.

Traeger (TCU commit) was one of 46 players age 15 and under from across the country to be invited to train in Carey, N.C. in September for a week-long tryout and selection process. At the end of the week, only 20 players made the National Team.

When asked how it felt to put on the Team USA jersey for the first time, Traeger said: “It was surreal. Team USA is the highest honor that you can have as a player.”

The schedule for the sophomore in high school’s Team USA representation is still up in the air due to the COVID-19 pandemic, as traveling internationally is not a certainty. If the team is able to play, it will be in the 2022 World Baseball Classic (similar to the Junior Olympics).

We caught up with Nolan after he arrived back to Texas for a little Q&A:

Q: To start this year, you were in school for 2 weeks, and then put school on the back burner to attend the National Team Trials. How did that feel?
Traeger: “This was a huge opportunity and the biggest thing that I have ever done before, so I knew I needed to go. We played 5 days, practiced for 3-4 hours, and then played games. Mentally and physically exhausting, but so much fun to play with the best of the best from around the country.”

Q: What are some of your goals for your baseball career?
Traeger: “I would like to play in the majors. If I get drafted in early rounds out of high school, that would be great. Right now, planning to attend TCU to play for the Horned Frogs to continue to develop my game with high quality D-1 baseball coaching.”

Q: Who is your favorite MLB catcher?
Traeger: “Yadier Molina”

Q: What is something that sets you apart from most high school catchers?
Traeger: “My fastest in-game throw to second base was clocked at 1.93 seconds.”

Q: Last year as a freshman, starting on Varsity, for a team with State Championship aspirations, did you feel like you had a lot to prove?
Traeger: “Yeah, I was younger than everyone, but I knew my place, and how I could help the team. I knew I was meant to be there.”

Q: What are you excited about for the 2022 Spring Season?
Traeger: “I think we have a really good chance for state this year. We return a lot of players and have a ton of talent down the entire line up. I predict we will win district, make it to state final four, and compete for a state title.”

Immediately following his time in North Carolina for Team USA, Traeger headed to Fort Meyers, Fla., for the 14U Perfect Game Select Festival. Again, only 46 players from around the country were selected to play and were divided between two teams. Of the 46 players, 5 were from Texas.

Baseball runs through the Traeger family blood. Nolan is the middle son of Jim and Erin. The oldest, Jax (Sr.), a RHP/3B for the Crusaders, is also committed to TCU Baseball, while youngest brother, Reid (8th grade), also competes year-round on his select 13U baseball team, Twelve 2026.

We look forward to seeing the older Traeger boys on the diamond again this Spring as the Crusaders strive for another State Championship. Concordia has reached at least the State Final Four the past seven seasons and were champions in 2015 and runners-up in 2014 and 2021.