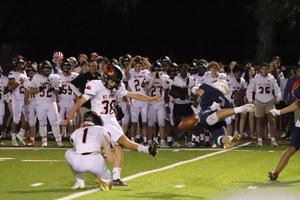 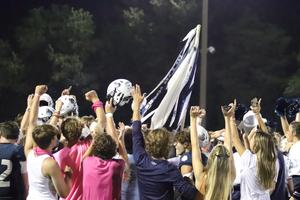 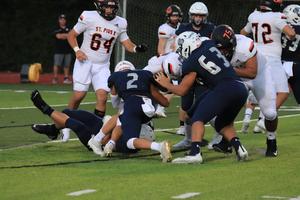 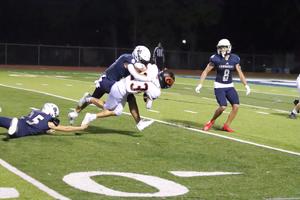 Under the Friday Night Lights in Thrilling Fashion, Concordia’s Football Team Battled for a 9-7 Victory over St. Pius X on Sept. 24th

Some wins feel different. Concordia Football’s 9-7 victory over St. Pius X Catholic High School on Friday, Sept. 24th was more than different, it was exceptional. At first read, the score looks like a battle on the baseball diamond, but in this defensive struggle, points were difficult to come by following some injuries from key offensive players from each team.

Huddy Yezak (Sr.) put Concordia on the scoreboard first with a 20-yard field goal in the 1st quarter. On Pius’ opening drive, LB Andrew Shrewsbury (Sr.) forced a fumble that Noah Marsh (Sr.) recovered. That was most of the action for the first half with the Crusaders leading 3-0 at halftime.

The endzones were only visited in the 3rd quarter, when Concordia QB Lou Lamar (So.) found TE Cole Merritt (Sr.) streaking up the field for a 27-yard TD pass to push the Crusaders lead to 9-0. The Panthers responded with a long, scoring drive of their own late in the 3rd quarter when RB Burke Battenfield (Sr.) found the endzone cutting into the Concordia lead, 7-9. Battenfield finished with 120 yards on 21 rushes as a bright spot for the Panthers offense.

Through most of the game, Concordia’s offense struggled to put drives together after starting QB Gideon Stark (Sr.) went out with an injury in the 2nd quarter. Insert running back and back-up quarterback, Lamar who managed the offense by relying on the ground game. Tate Elder (Sr.), Ryder Anderson (Jr.), Ayden Dominy (Jr.), and Lamar’s combined rushing attack resulted in 126 yards that kept the clock ticking. Only one pass attempt was made in the second half, but it was Merritt’s touchdown grab.

The Crusaders stout defense only allowed 7 points on 301 yards of Panther offense (almost 2x Concordia’s offense - 153 yards). Shrewsbury and Elder led the defense with 12 and 11 tackles respectively, while 15 other Crusaders registered at least one tackle. When it mattered most, Concordia repeatedly got stops on 3rd and 4th downs, including an impressive goal line stand in the first half where the Panthers walked away empty-handed.

After a couple successful out routes by Panther WRs to stop the clock, St. Pius QB Cale Skinner (Jr.) scrambled out-of-bounds for a first down. On the play, Concordia’s LB Shrewsbury was called for a personal foul unnecessary roughness that resulted in a fresh set of downs and the ball on the Crusaders 22-yard line. Following some failed endzone passes, the Panthers sent in their kicker to attempt the game winner. Senior leader RB/DB Tate Elder would not be denied on the edge. Elder beat the blockers and came flying in to block the FG attempt, securing the game for the Crusaders.

St. Pius X (2-2 Overall and 0-1 District) had previously dominated Concordia since 2012. Friday night’s victory was only the second time in school history for the Crusaders to defeat the Panthers.

In the 2012-2013 school year, Concordia moved up to TAPPS’ highest division and started playing in the same district as St. Pius. In 11 historical meetings (2012 and 2013 the teams played x2 a year during district play), the Panthers previously held a 10-1 advantage with the Crusaders lone win in 2013’s second match-up. Entering Fall 2021, St. Pius had outscored Concordia 452-246 over the course of the series.

The win came on a big night for SaderNation with the student section hyped up and dressed in neon, the band rockin’, cheerleaders pumping up the crowd, and many guests on campus. Friday night was the annual middle school football association night for Trinity Klein Lutheran, Salem Lutheran, and St. Anne Catholic schools as well as a showcase half-time show from the Little Sader Cheer Clinic 1-8th grade participants.