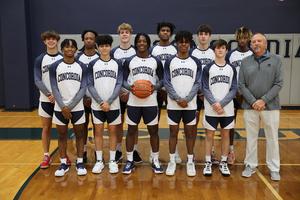 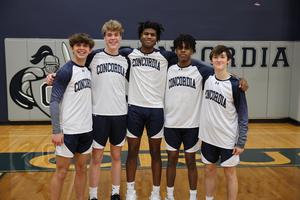 At the beginning of November, Concordia’s Boys Basketball team was one of 12 TAPPS (Texas Association of Private and Parochial Schools) teams to compete in the Patrick H. Alexander Jr. Basketball Invitational Showcase in Laredo, TX. The Crusaders started the season well with 3 wins in the tournament that featured some of the top state title contenders.

St. Augustine Catholic High School (Laredo, TX) hosted the tournament and welcomed teams from all over the state including Houston, Austin, San Antonio, Midland, and Laredo.

On Saturday, the Crusaders played two games that included another 85-49 victory over host St. Augustine and a nail-biter of a win over Austin St. Michael’s, 66-63. Against St. Augustine, Howie K. (So.) exploded with 23 points with Jesse F. and Donovan H. each reaching double figures at 15 and 11 points.

In the final game against Austin St. Michael’s, the trio of Howie K., Jesse F., and Donovan H. combined for almost 75% of the team’s points to lead the team with Grant S. (Sr.) chipping in 9 points.

Concordia features a balanced offensive attack which is incredibly difficult for teams to defend. Lightning quick guards, shooters at every position, and two athletic forwards at 6’6” and 6’7”, teams will have tough decisions on how to play the Crusaders.

Since 2014-2015, in the last eight seasons, Concordia has reached at least the TAPPS 6A State Final Four with a state title in 2018. The team looks ready to extend that streak and will take a team balanced with seniors, juniors, and sophomores into a schedule of many tough public and private schools before their TAPPS District season.

The first non-tournament game for Concordia will be at The Woodlands Christian Academy against the Warriors on Nov. 18th at 7 pm. The Crusaders will look to avenge a loss from 2021-2022.